A Brief History of Newspapers

Newspapers have been an integral part of people’s lives for nearly 400 years. From the initial handwritten notes to the advent of the printing press, print media has come a long way.

The history of written news dates back to the Roman empire around 59BC. Back then, Rome was the centre of the western world and was the hub of innovation — from grid-based cities to the invention of concrete, Rome was leading the way. Most historians credit the birth of the regular written news updates to the Romans. Acta Diurna (which roughly translates to daily public records) which was hard carved news on stone or metal sheets, covering politics, military campaigns, chariot races and executions, was published daily and posted by the government in the Roman Forum. The Acta which was originally kept secret, was later made public by Julius Caesar in 59BC.

The history of the printed newspaper goes back to 17th century Europe when Johann Carolus published the first newspaper called ‘Relation aller Fürnemmen und gedenckwürdigen Historien’ (Account of all distinguished and commemorable news) in Germany in 1605. You can access some of the digitised versions from 1609 here. Europe was the hub of printed newspapers in the 17th with quite a few of them starting operations in German, French, Dutch, Italian and English soon after.

The first newspaper to be printed in India was the Hicky’s Bengal Gazette in 1780 from a printing press in Calcutta. 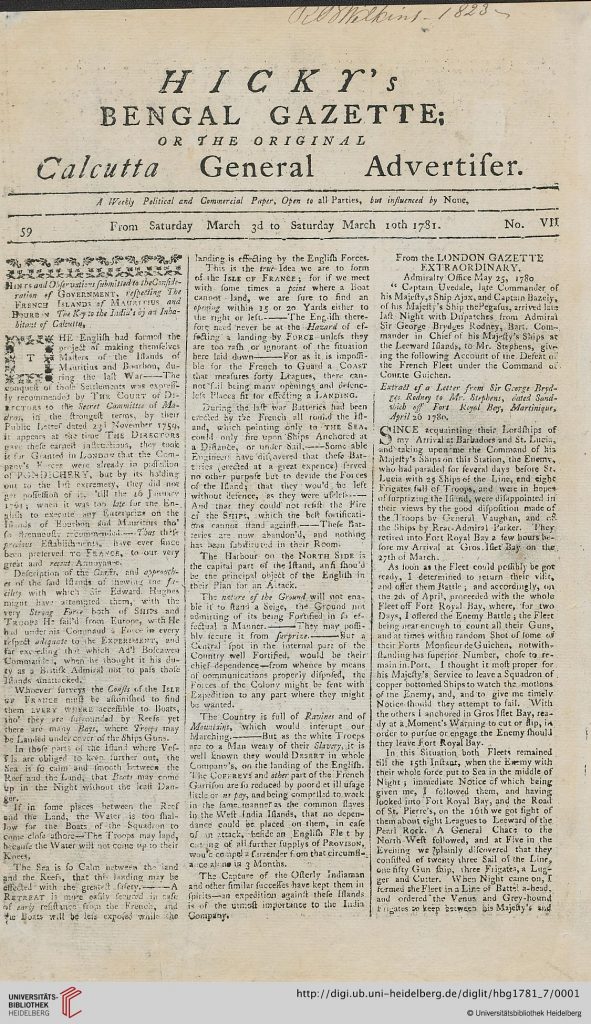 Newspapers have been integral to society in recent history and have had a significant effect in shaping our political views. The initial newspapers were expensive and hence read-only by the privileged few. The rapid evolution of the printing press brought down the costs of newspapers and helped print a lot more copies at much lower costs.

With the advent of advertising in the 19th century, the cost of newspapers fell significantly and was well within reach of a much wider population. Since then, print media has been growing leaps and bounds and has been an integral part of all of our daily lives. As the circulation grew, so did the ad revenues. These were the heydays of print media — they were the innovators in using illustrations and images in storytelling, in using telegraph and telephone for rapid sourcing of news from across the world, and setting up widespread distribution channels to reach their audience. Most of the publications were hugely profitable and owned by wealthy individuals who used these mediums to spread their political views.

For nearly 2 centuries since then print media continued to be a profitable business.

The American newspaper business as we know it was born on September 3, 1833, when a twenty-three-year-old publisher named Benjamin Day put out the first edition of the New York Sun. Whereas other papers sold for five or six cents, the Sun cost just a penny. For revenue, Day relied on advertising rather than on subscriptions. Above all, he revolutionised the way papers were distributed. He sold them to newsboys[9] in lots of a hundred to hawk in the street. Before long, Day was the most important publisher in New York.

Newspapers have faced competition from other media vehicles in the past. First, In the 1920s and 30s, when radio adoption was growing and organisations started broadcasting news over radio transmission. News over radio was almost immediately available rather than waiting for the next day.

And then, in the 50s when television was a popular device in western homes and became the primary medium to influence public opinion. The news formats on television were a lot more engaging when compared to print or radio. The concept of primetime was invented, and people were glued to their television sets between 8pm – 10pm to catch the latest political, sports and weather updates in their country, and across the world.

While both these mediums did have an impact on newspapers initially, print didn’t face any existential threat from either of them. In fact, newspaper circulation continued to grow as television got more popular and they were largely considered parallel media rather than direct competition.

However, the last 20-25 years have not been that accommodating to print media in general. The rapid rise of digital media on the back of the internet and smartphone penetration has had devastating effects on newspapers worldwide. The graph below tells the sad tale of newspaper firms in the US, and this continues to be the story almost in every country across the world. 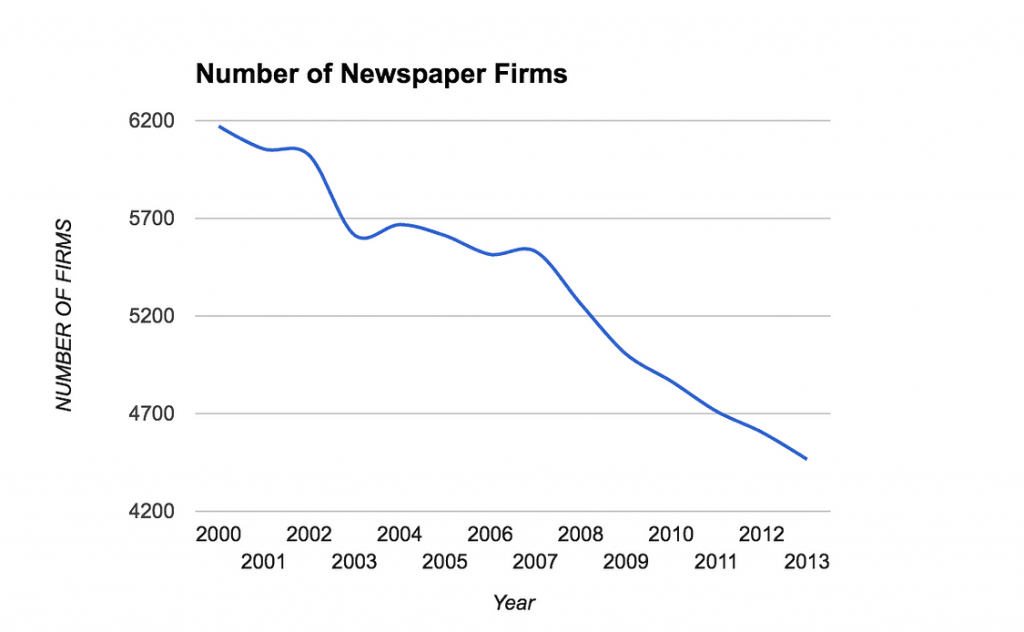 The number of newspaper firms in the US between 2000-2014 as reported by the Census Bureau (Source: Wikipedia)

Digital media has been evolving rapidly over the last 20 years. From the initial days of desktop sites to m-dot sites, responsive web, native apps, PWAs and screen-less devices, digital news has been keeping pace with the technology disruption in the media and entertainment industry. While TV and radio did not affect print media much, the digital age poses a serious threat to the print industry as a whole.

While TV and radio were parallel formats, instantaneous and engaging, print still had two notable advantages – a) it was non-linear AND b) portability, i.e. people could read the news when and where they wanted to, rather than keeping themselves free at home during primetime. The same however isn’t true for digital media which offers non-linear, highly personalised news at your fingertips in extremely engaging formats that were never seen before (360 video, AR and VR). Primetime is not longer a fixed hour, it’s when you tap on your mobile screen.

This has changed everything for newspapers. Most people get their news on their smartphones (news sites, aggregators, social, search, etc.). Newspapers, which were an integral part of everyone’s morning, are now rapidly fading away, only to be replaced by more screen time.

The 400-year-old industry is certainly facing its toughest time in history, much like the 90s and early 2000s when photography was disrupted through the invention of digital photography devices.

This post is first posted on quintype.com.
Written by: Chirdeep Shetty

RECENT POSTS
OUR SERVICES
CONTACT US
If you would like to learn more about Digital Publishing Solutions, AWS Cloud or have a question about our services, please fill out the form below and a member of our team will be in touch.
Go to Top
This website uses cookies to improve your experience. We'll assume you're ok with this, but you can opt-out if you wish. Ok No Read More
Privacy & Cookies Policy

Any cookies that may not be particularly necessary for the website to function and is used specifically to collect user personal data via analytics, ads, other embedded contents are termed as non-necessary cookies. It is mandatory to procure user consent prior to running these cookies on your website.